This paper extends that work by integrating augmented reality (AR) into the activities.

In our previous research, we showed that students using the educational robot Thymio and its visual programming environment were able to learn the important computer-science concept of event-handling. This paper extends that work by integrating augmented reality (AR) into the activities. Students used a tablet that displays in real time the event executed on the robot. The event is overlaid on the tablet over the image from a camera, which shows the location of the robot when the event was executed. In addition, visual feedback (FB) was implemented in the software. We developed a novel video questionnaire to investigate the performance of the students on robotics tasks. Data were collected comparing four groups: AR+FB, AR+non-FB, non-AR+FB, non-AR+non-FB. The results showed that students receiving feedback made signi ficantly fewer errors on the tasks. Those using AR made fewer errors, but this improvement was not signi ficant, although their performance improved. Technical problems with the AR hardware and software showed where improvements are needed. 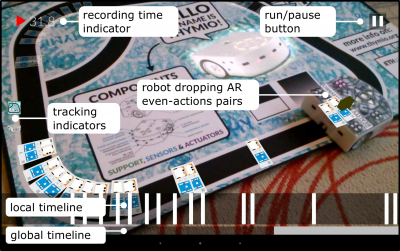