We propose ways to increase the displayed image pixel resolution without having to manufacture any additional pixels, while at the same time maintaining full-color 24-bit images.

September 29, 2016
Journal of the Society for Information Display 2016

We propose ways to increase the displayed image pixel resolution without having to manufacture any additional pixels, while at the same time maintaining full color 24-bit images. In DLP projectors, different gray levels are traditionally created using binary pulse-width modulation (BPWM), where light from a constant light source is modulated by the DMD and the gray level results solely from the ratio of time the micromirror spends in the on and off positions. By also modulating the intensity of the light source, the time required to show an 8-bit grayscale image can be reduced by approximately factor 32 with the same binary pattern rate. A full 24-bit image can then be displayed in as low as 1ms. We propose two methods to spatially separate these high frame rate images into individually addressable projections, and to merge them into a single, higher pixel resolution image. Two prototypes were built to showcase their feasibility and the images’ increased pixel and spatial resolution. In the first prototype, the DMD is illuminated by red, green, and blue LEDs. The image is focused and then redirected by a galvanometer, a high-speed, high-precision radial motor with a small mirror mounted to the shaft that directs the image among a number of defined positions during each frame. A set of fixed mirrors aligns the images to form a larger combined image, as seen in the concept drawing in Fig. 1a. In the second prototype, the DMD is sequentially illuminated by laser light sources from different directions, therefore throwing the projection in different directions (Fig. 1b). In either case, a full frame is composed of multiple temporally separate tiles. The frame rates are sufficiently high, so that the human eye cannot distinguish that the tiles appear sequentially. In both prototypes, in order to merge the tiles into a single projection, a calibration is applied that uses a digital camera and computer vision to find the mappings from the tiles to the combined projection. The calibration also creates masks that are multiplied with each image to correct the brightness and color distribution and apply a smooth blending between them. 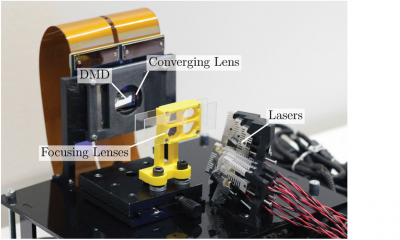