We propose the first system for live dynamic augmentation of human faces.

The key challenge of live augmentation is latency — an image is generated according to a specific pose, but is displayed on a different facial configuration by the time it is projected. Therefore, our system aims at reducing latency during every step of the process, from capture, through processing, to projection. Using infrared illumination, an optically and computationally aligned high-speed camera detects facial orientation as well as expression. The estimated expression blendshapes are mapped onto a lower dimensional space, and the facial motion and non-rigid deformation are estimated, smoothed and predicted through adaptive Kalman filtering. Finally, the desired appearance is generated interpolating precomputed offset textures according to time, global position, and expression. We have evaluated our system through an optimized CPU and GPU prototype, and demonstrated successful low latency augmentation for different performers and performances, in various speeds. In contrast to existing methods, the presented system is the first method which fully supports dynamic facial projection mapping without the requirement of any physical tracking markers and incorporates facial expressions. 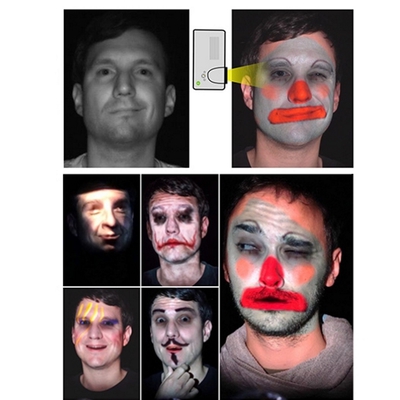