We develop several interactive experiences where users can retrieve complex information such as the function of buttons on a device, directions embedded into a LCD screen, and simplified device pairing.

Touch-based communication offers a direct and intuitive way for users to initiate and control data transfer when using tangible and ubiquitous interfaces. However, this requires that each interactive device be instrumented with a dedicated radio transmitter, which limits many applications. While not all devices have radio hardware, all devices do emit small amounts of electromagnetic noise in the form of EMI. We argue that if properly modulated these electromagnetic emissions can be used as an untapped communication channel capable of transmitting arbitrary data. To enable this, a spread spectrum frequency shift keying modulation scheme has been developed to encode data onto the device’s EMI. When the device is touched by a user, the data encoded EMI signal travels through their body and into our custom wrist band, consisting of a single op-amp and MCU. Our results show that we are able to turn electronic primitives such as LEDs, buttons, I/O lines, LCD screens, motors and power supplies into radio transmitters capable of touch communication. Effective data rates range from 5.8Kbps to 22 bit per image depending on the primitive used. To demonstrate this new communication technique, we develop several interactive experiences where users can retrieve complex information such as the function of buttons on a device, directions embedded into a LCD screen, and simplified device pairing. Ultimately, EM-Comm enables nearly any electronic device to be turned into a touch-based radio transmitter with only a software upgrade. 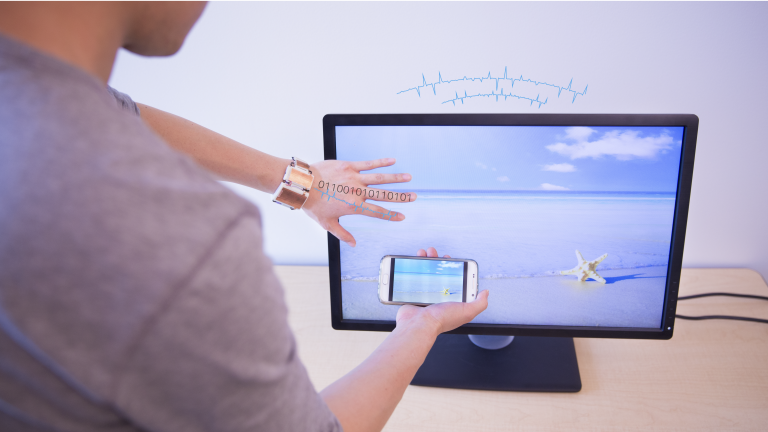