We use a transparent LCD panel as a programmable dynamic mask.

One aim of Spatial Augmented Reality is to visually integrate synthetic objects into real-world spaces amongst physical objects, viewable by many observers without 3D glasses, head-mounted displays or mobile screens. In common implementations, using beam-combiners, scrim projection, or transparent self-emissive displays, the synthetic object’s and real-world scene’s light combine additively. As a result, synthetic objects appear low-contrast and semi transparent against well-lit backgrounds and do not cast shadows. These limitations prevent synthetic objects from appearing solid and visually integrated into the real-world space. We use a transparent LCD panel as a programmable dynamic mask. The LCD panel displaying the synthetic object’s silhouette mask is colocated with the object’s color image, both staying aligned for all points-of-view. The mask blocks the background providing occlusion, presents a black level for high-contrast images, blocks scene illumination thus casting true shadows, and prevents blow-by in projection scrim arrangements. We have several implementations of SAR with LCD masks: 1) beam-combiner with an LCD mask, 2) scrim projection with an LCD mask, and 3) transparent OLED display with an LCD mask. Large format (80” diagonal) and dual layer volumetric variations are also implemented. 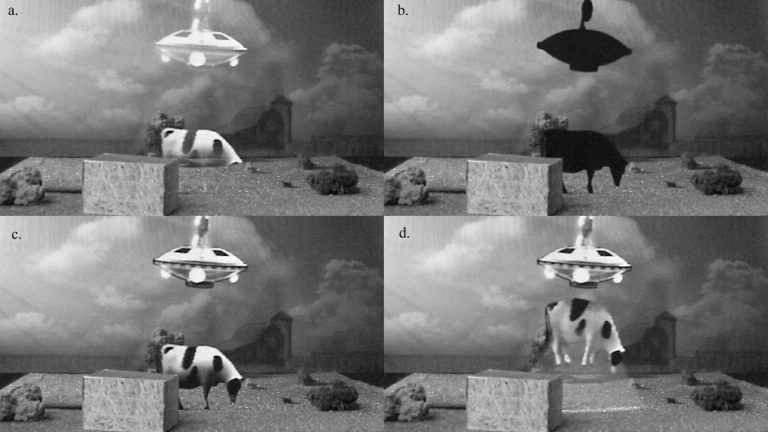