Toward Better Understanding of Engagement in Multiparty Spoken Interaction with Children

We introduce a concrete metric for engagement—willingness to continue the interaction—that leads to better inter-coder judgments for children playing in pairs. 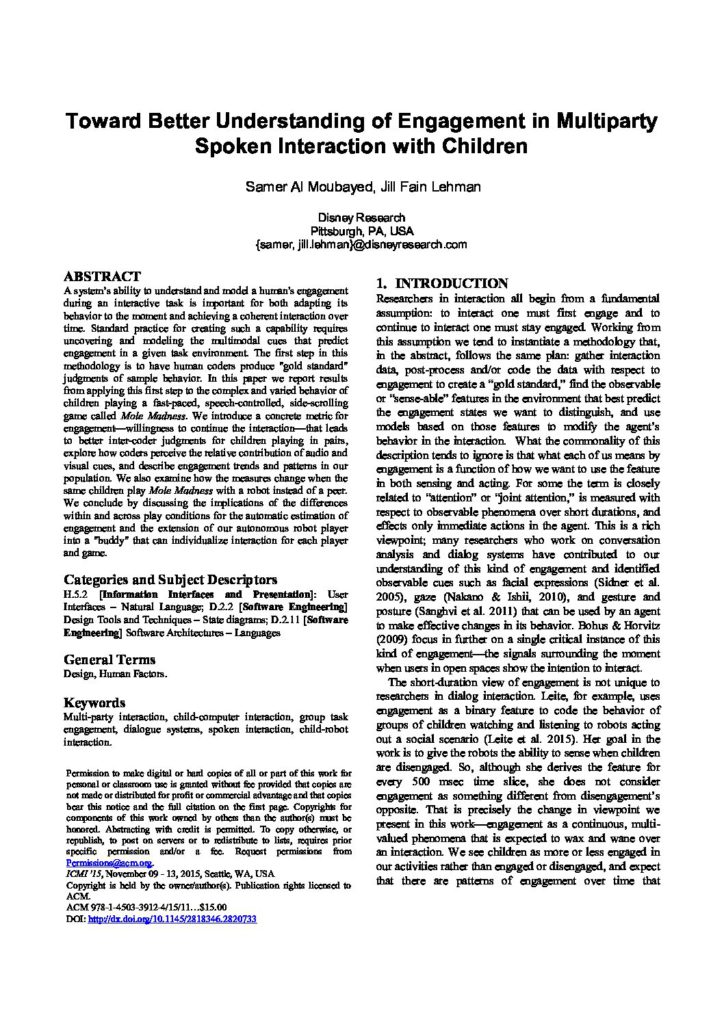 Toward Better Understanding of Engagement in Multiparty Spoken Interaction with Children

A system’s ability to understand and model a human’s engagement during an interactive task is important for both adapting its behavior to the moment and achieving a coherent interaction over time. Standard practice for creating such a capability requires uncovering and modeling the multimodal cues that predict engagement in a given task environment. The first step in this methodology is to have human coders produce “gold standard” judgments of sample behavior. In this paper we report results from applying this first step to the complex and varied behavior of children playing a fast-paced, speech-controlled, side-scrolling game called Mole Madness. We introduce a concrete metric for engagement—willingness to continue the interaction—that leads to better inter-coder judgments for children playing in pairs, explore how coders perceive the relative contribution of audio and visual cues, and describe engagement trends and patterns in our population. We also examine how the measures change when the same children play Mole Madness with a robot instead of a peer. We conclude by discussing the implications of the differences within and across play conditions for the automatic estimation of engagement and the extension of our autonomous robot player into a “buddy” that can individualize interaction for each player and game.